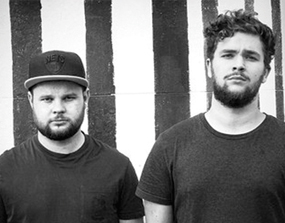 The band, composed of bassist/singer Mike Kerr (25) and drummer Ben Thatcher (26), was formed in Worthing in 2013, and played their first gig two days after Kerr’s return to England from his “working holiday” in Australia.

During the summer of 2013, Arctic Monkeys drummer Matt Helders was seen wearing a shirt supporting Royal Blood (before the release of their first single) during their Glastonbury Festival concert in July. On 11 November 2013, the duo released their debut single, “Out of the Black”, which came with a B-side called “Come On Over”.

In November 2013, it was announced that Royal Blood would be supporting Arctic Monkeys for two Finsbury Park shows in May 2014. In December 2013 Royal Blood were nominated for BBC Sound of 2014. Royal Blood released their second single, “Little Monster”, on 11 February 2014. The band also released a four-track EP, featuring “Out of the Black”, “Little Monster”, “Come On Over” and “Hole” on 11 March 2014 in North America. Their debut album, Royal Blood, was released on 25 August 2014 to commercial success & was well-received by critics. Royal Blood was verified by the Official Charts Company as the fastest-selling British rock debut album in three years in the UK.

Royal Blood performed at South by Southwest in Austin, Texas in March 2014; at Liverpool Sound City festival and at BBC Radio 1’s Big Weekend in Glasgow in May; and at Download Festival and Glastonbury Festival in June. They performed at T in the Park festival in July, and at Reading Festival, but got cut short at their Leeds Festival show, as well as Osheaga in August 2014.

Mike Kerr has previously used the name Royal Blood when living in Australia in 2012, working with drummer Matt Swan.
A video clip for “Out of the Black” entered rotation as part of cable network AXN Japan’s “AXN Tunes” program in October 2014; music videos aired on-the-hour as filler in between regularly scheduled, syndicated programming.

In October 2014, Royal Blood announced details of their biggest European tour to date, starting in Germany on 10 January, and ending in Sweden on 23 March. On 10 November 2014, Howard Stern said on his radio show that he was a fan of the band. He had watched them on a MTV Awards Show and was impressed at the sound coming from only a two-piece band.

Also in November 2014 Led Zeppelin’s guitarist, Jimmy Page said “I went to hear them in New York. They were fantastic. Absolutely riveting, they’re such fine musicians.Their album has taken the genre up a serious few notches. It’s so refreshing to hear, because they play with the spirit of the things that have preceded them, but you can hear they’re going to take rock into a new realm – if they’re not already doing that. It’s music of tremendous quality.”